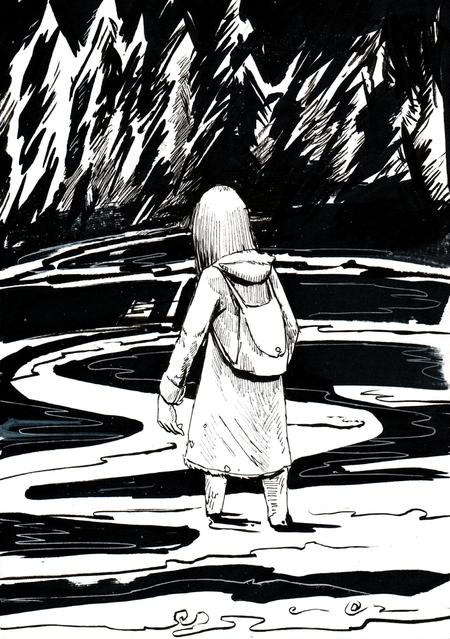 At first, the moment she saw the glittering pink plastic thing half covered in rotting leaves and muddy water, she felt truly free for the first time in years. It wasn’t until the black van had driven slowly past her and then stopped to turn around and come back for her on the darkened highway that she began to wonder if throwing away her only link with the world was such a smart thing to do.

The headlights were quickly sweeping the trees to her left when she decided waiting for the van to come back for her was an even worse idea.  She ran for the woods in the opposite direction, skipping over a dead log in the ditch, splashing through cold muddy water.  He heart beat against her chest like a tortured bird in a cage.  An icy sensation of terror swelled from her stomach as she stumbled clumsily across uneven, unfamiliar moonlit terrain.  The road was empty and dark in either direction, except for the rumbling black van.  A sense of menace oozed from the dark rumbling vehicle.  She had no doubt that whoever was driving it meant her serious harm.

She vanished into the woods, ducked behind dew covered brush and watched the van, her breath harsh and steaming in the chilly night air.  The van had stopped on the side of the road.  Moonlight gleamed across the nebulous black windshield, revealing nothing of who sat behind the steering wheel. 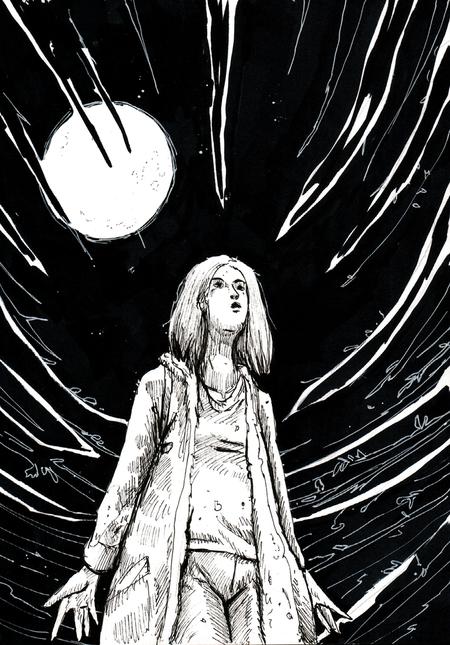 She climbed over trees which had fallen a hundred years ago, their gray skin eaten by bleak green lichen, covered in wispy, pale, Spanish moss funereal garments.  Her hands were soon soaked with a heady green stench, stained by the ancient colors of the forest, her clothes saturated with cool sweat and the fluids excreted by the forest.  It was by degrees making her part of its texture and scents.  She would not be surprised to feel moss falling across her brow soon.

After a few minutes, the wood opened up and cast her into a wide moonlit field.

She knew within a few feet that she was never meant to walk here.  It had been a mistake, an accident of chance, that found her traipsing through this wide field of dead grass, chest high and dry as bones.  The crackles and snaps as she walked through years of accumulated deadfall echoed through the night.

The field came to an end, demarcated by a line of thick brush that led to the giant arboreal denseness again.  The moonlight did not peel back the forest’s aggressive darkness.  She eyed the new night that spilled from the tall trees with a growing terror.  To the left, in the high dead weeds of the field, she heard something moving.

It was closing in on her.

A badger looking for a night meal?  A fox stalking a rabbit?

Now, to the right, a new sound.

Bigger than a badger or a fox.

The tall weeds shook and snapped under this unseen weight.

She took an unwilling step towards the black forest line.

The wood opened before her, brush and limbs parting as if by some invisible hand.

A voice murmured in a strange language.  It whispered of safety from dark things.  It promised escape.

The sounds and movement grew more aggressive.  The weeds only a few feet away snapped and fell away.

With one last look over her shoulder, she took a step inside the forest.

The limbs and brush closed gently behind her; the voice sighed in contentment.

The darkness feasted once more. 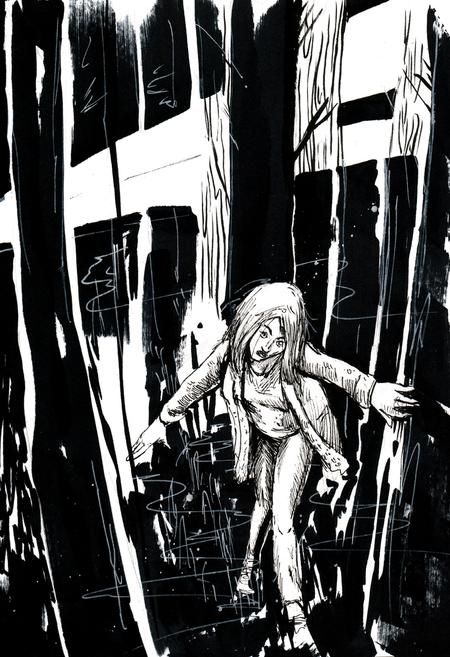 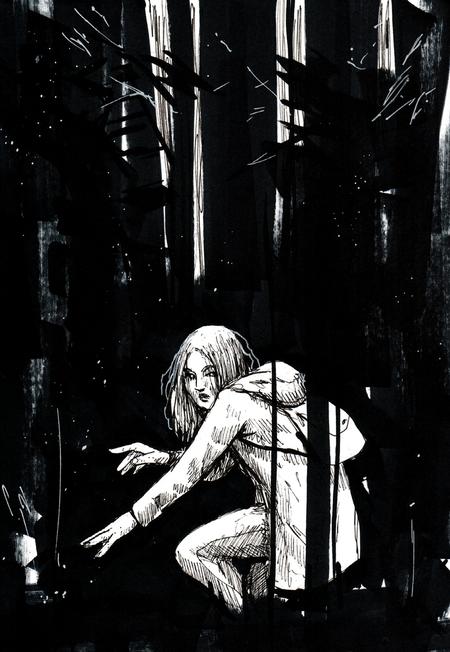 Tell me where did you sleep last night.

Where the sun don't ever shine.
I would shiver the whole night through.”

Tendrils of ghostlike fog rose from the forest floor.  Deeper in the wood, where light rarely penetrated the dense canopy of arching, tangled limbs, an unseen animal gave a high scream of distress, or perhaps hunger.  In this place, those states equated to much the same thing, for this was a lost place.  No white man had walked this forest for going on a hundred years or more.  The original people who called this land home had dark skin and darker ways.  And they had believed in dark gods that thrived on hot blood and swarming pain.  But they no longer knew tribute, these baleful gods.  Now they walked their invisible ways alone, cold and hungry.

The girl had run away from home, a place where her parents knew only resentment and lost years.  Her mother blamed her; her father blamed her mother.  And she…she blamed the God they both worshipped, an ambiguous entity with no love for her, no plan for her escape.  So she had taken it upon herself to find escape.  Packed a bag with some clothes, a small mp3 player.  She stole cash from her mother’s purse the morning before.  Not much.  But it was all she could find among the disorganized contents of her bag.  Along the way, she’d gotten rid of the small pink cellphone her parents had insisted upon her carrying wherever she went.  It was, in the end, just another chain with which to enslave her.  With it they knew where she was every minute of the day or night.  Now it lay in a ditch, miles back down her escape route.

The van didn’t move.  She moved slowly away from the bushes and picked her way through thick undergrowth and wet weeds.  She wasn’t about to chance using the road again tonight.  She would cross the woods until she found another road or maybe someone’s house where she could use a phone.  Fear had changed her view on what constituted slavery.  Being locked in her room as punishment for trying to runaway was far preferable to being raped, tortured and killed by some  perverted creep.

The quiet forest seemed to embrace her.  The trees rose up like silent guardians…or perhaps judges.  Moonlight glimmered from a million pine needle tips, a shimmering starscape fifty feet above her head.  Small noises erupted every once and a while.  Hunting night creatures?  But she sensed more intelligence behind the sounds.  Hunting her?

She felt fear, but it was a remote sort of fear compared to the very real terror of what might await her back on the road.  In any case, it wasn’t the type of fear that stopped her from traveling deeper into the forest’s embrace.  Her footsteps crackled through the night. 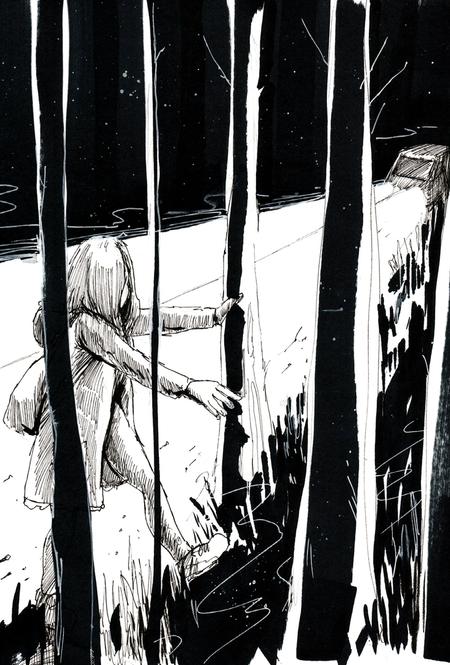